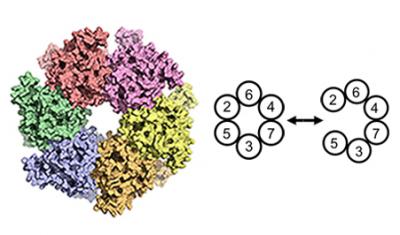 In a study published ton August 1, 2014 in Genes & Development, Dr Christian Speck from the MRC Clinical Sciences Centre's DNA Replication group, in collaboration with Brookhaven National Laboratory (BNL), New York, reveals the intricate mechanisms involved in the enzyme that governs DNA duplication during cell division. By developing a sophisticated system using synthetic, chemical and structural biology approaches, the study reveals how a key enzyme involved in duplicating genetic information embraces DNA through a gated system, which opens up at precise positions allowing for a highly regulated replication process. This work enhances current understanding of an essential biological process and suggests a route for stopping cell division in disease such as cancer. When a cell divides, genetic information is duplicated in a process known as DNA replication. For this to occur, a 'replication machine' is assembled on top of the DNA prior to duplication. A protein complex known as ORC that recognises the DNA replication origin initiates the whole process. Next, an enzyme, MCM2-7 helicase, whose role is to unwind and separate the two strands of the DNA helix, is loaded onto the DNA by the machine system ORC. The helicase is a ring-shaped enzyme composed of six subunits (hexamer), though how the ring structure opens and encircles the DNA has, until now, remained a mystery. Initial theories within the field assumed the helicase to exist in an open ring conformation. Dr. Speck's team argued that this would undoubtedly lead to poorly regulated DNA replication with no control or specificity. To examine the helicase activity in more detail, Jingchuan Sun at BNL used an electron microscope and revealed, contrary to initial theories, the helicase actually existed as a closed ring conformation.
Login Or Register To Read Full Story
Login Register