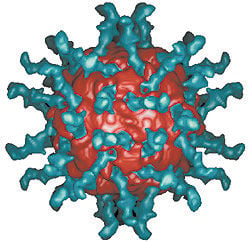 Dr. Matthias Gromeier's original notion that polio virus (image) might be used to kill cancerous tumors was met for some time with much disdain. But now, two decades later, use of the virus known for crippling and killing millions is showing promise against one of the deadliest forms of cancer - glioblastoma brain tumors. In a 60 Minutes story airing on CBS the evening of March 29, 2015, reporter Scott Pelley meets two patients participating in the phase 1 clinical trial of the polio-virus-based anti-glioblastoma therapy, who have been declared cancer-free by doctors. "I got a range of responses, from crazy to you're lying... most people just thought it was too dangerous," said Dr. Gromeier, an Associate Professor of Surgery and Associate Professor in Molecular Genetics and Microbiology at Duke, where he has been for the last 15 years, when he started pushing his idea to attack tumors with the polio virus. One of those naysayers was Dr. Henry Friedman, a neuro-oncologist who is now the Deputy Director of the Brain Tumor Center at Duke University where the phase 1 clinical trial of the polio-virus therapy is now being carried out. "I thought he was nuts," Dr. Friedman told Pelley. "I really thought he was using a weapon that produced paralysis." That was 15 years ago. Today, after research, animal trials, and now this human clinical trial, Dr. Friedman is more than optimistic. "This, to me, is the most promising therapy I have seen in my career, period," said Dr. Friedman who has been researching a cure for glioblastoma for more than 30 years. Dr. Gromeier's research yielded a genetically modified polio virus that could be used safely in animals and now, it seems, in humans.
Login Or Register To Read Full Story
Login Register