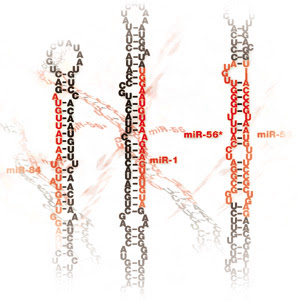 Micro RNAs are essential regulators of the genetic program in multicellular organisms. Because of their potent effects, the production of these small regulators has itself to be tightly controlled. That is the key finding of a new study performed by Tübingen scientists at the Max Planck Institute for Developmental Biology. They identified a new component that modulates the production of micro RNAs in thale cress, Arabidopsis thaliana, by the removal of phosphate residues from a micro RNA-biogenesis enzyme. This can be as quick as the turn of a switch, allowing the plant to adapt to changing conditions. In this study, the scientists combined advanced imaging for facile detection of plants with defective micro RNA activity with whole genome sequencing for rapid identification of new mutations. The cell seems to thwart itself: Reading the DNA, a mobile messenger RNA is produced in the cell nucleus, exported to the cytoplasm where it serves as a blueprint for the production of proteins. At the same time, the cell is able to produce micro RNAs that, by binding to specific messenger RNAs, can block protein production or even initiate its destruction. But why does the cell start a costly process and immediately stops it? "Well, the answer lies on the fine balance the cell has to achieve between producing a protein and avoid(ing) having an excess of it. Reaching the right level of a protein and its adequate temporal and spatial distribution requires, sometimes, opposed forces," says Dr. Pablo Manavella, first author of the study, published in the November 9, 2012 issue of Cell, and a postdoc in the department of Dr. Detlef Weigel at the Max Planck Institute for Developmental Biology. "Once the transcript of the messenger RNA is activated it is quite stable.
Login Or Register To Read Full Story
Login Register