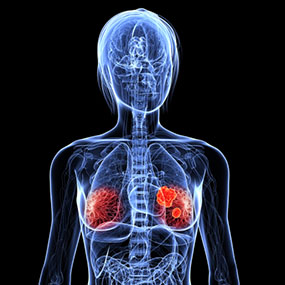 MIT biologists have identified a new biomarker that can reveal whether patients with a particularly aggressive type of breast cancer will be helped by paclitaxel (commercially known as Taxol), one of the drugs most commonly used to treat this cancer. The findings could offer doctors a new way to choose drugs for this type of breast cancer, known as “triple-negative” because it lacks the three most common breast cancer markers: estrogen receptor, progesterone receptor, and Her2 protein. The biomarker, a protein called Mena, has previously been shown to help cancer cells spread through the body. The researchers also showed that combining paclitaxel with another drug that interferes with Mena’s effects can kill the cells much more effectively than paclitaxel alone. “Drugs that target that pathway restore paclitaxel sensitivity to cells expressing Mena,” says Dr. Frank Gertler, an MIT Professor of Biology and a member of the Koch Institute for Integrative Cancer Research. “The study also suggests that, during the course of treatment, it might be worth monitoring the level of Mena. If the levels begin to increase, it might suggest that switching to another type of therapy could be useful.” Dr. Gertler is the senior author of the study, which was published online on November 3, 2016 in the journal Molecular Cancer Therapeutics. The article is titled “Mena Confers Resistance to Paclitaxel in Triple-Negative Breast Cancer.” Dr. Madeleine Oudin, a Koch Institute postdoc, is the paper’s lead author. The Mena protein is known to interact with a cell’s cytoskeleton in ways that help the cell to become mobile.
Login Or Register To Read Full Story
Login Register