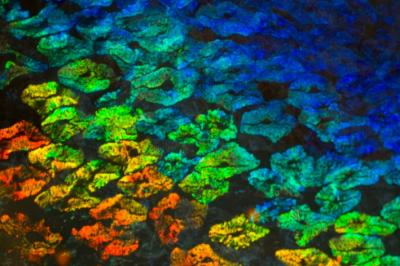 Color in living organisms can be formed in two ways: pigmentation or anatomical structure. Structural colors arise from the physical interaction of light with biological nanostructures. A wide range of organisms possess this ability, but the biological mechanisms underlying the process have been poorly understood. Two years ago, an interdisciplinary team from the University of California at Santa Barbara (UCSB) discovered the mechanism by which a neurotransmitter dramatically causes changes of color in the common market squid, Doryteuthis opalescens. That neurotransmitter, acetylcholine, sets in motion a cascade of events that culminate in the addition of phosphate groups to a family of unique proteins called reflectins. This process allows the proteins to condense, driving the animal's color-changing process. Now the researchers have delved more deeply to uncover the mechanism responsible for the dramatic changes in color used by such creatures as squids and octopuses. The findings were published in the February 12, 2013 issue of PNAS, in a paper by molecular biology graduate student and lead author Daniel DeMartini and co-authors Dr. Daniel V. Krogstad and Dr. Daniel E. Morse –– and are described in an article by Dan Crossins in the July 1, 2013 issue of The Scientist. Structural colors rely exclusively on the density and shape of the material rather than its chemical properties. The latest research from the UCSB team shows that specialized cells in the squid skin called iridocytes contain deep pleats or invaginations of the cell membrane extending deep into the body of the cell. This creates layers or lamellae that operate as a tunable Bragg reflector.
Login Or Register To Read Full Story
Login Register