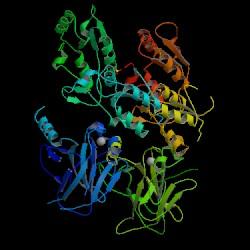 Damage to DNA is a daily occurrence, but one that human cells have evolved to manage. Now, in work reported in a new paper published on July 2, 2018 in Nature Structural & Molecular Biology, Mayo Clinic researchers have determined how one DNA repair protein gets to the site of DNA damage. The article is titled “Mechanism of 53BP1 activity regulation by RNA-binding TIRR and a designer protein.” The authors say they hope this discovery research will help identify new therapies for ovarian cancer. While the human genome is constantly being damaged, cells have proteins that detect and repair the damage. One of those proteins is called 53BP1. It is involved in the repair of DNA when both strands break. In the publication, Georges Mer, PhD, a Mayo Clinic structural biologist, and his team report on how 53BP1 relocates to chromosomes to do its job. Dr. Mer explains that, in the absence of DNA damage, 53BP1 is inactive -- blocked by a protein called "TIRR." Using X-ray crystallography, the authors show that TIRR obstructs an area on 53BP1 that 53BP1 uses to bind chromosomes. But what shifts TIRR away from 53BP1, so the repair protein can work? The scientists theorized that RNA was responsible for this shift. To test their theory, they engineered a protein that would bind to the 53BP1 repair protein and the RNA molecules released when DNA is damaged. This effort, plus other work detailed in the paper, provides evidence that their idea was sound. The authors report that when DNA damage occurs, RNA molecules produced at that time can bind to TIRR, displacing it from 53BP1 and allowing 53BP1 to swing into action. "Our study provides a proof-of-principle mechanism for how RNA molecules can trigger the localization of 53BP1 to DNA damage sites," says Dr. Mer.
Login Or Register To Read Full Story
Login Register