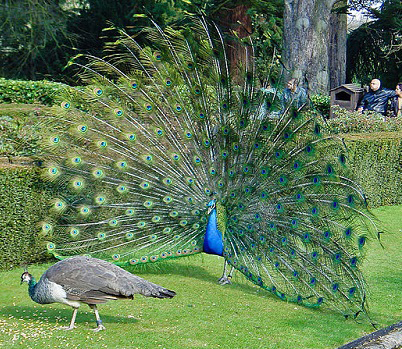 Scientists from the University of Sheffield in the UK have found that although male and female birds have an almost identical set of genes, they function differently in each sex through a mechanism called alternative splicing. Males and females of the same bird species can be strikingly different. For example, in addition to fundamental differences in reproduction, the sexes can show profound variation in behavior, coloration, metabolism, disease incidence, and life history. The research team wanted to understand how these remarkable differences develop despite males and females sharing mostly the same DNA. Thea Rogers, a PhD student at the University of Sheffield and lead author of the study, said: "One notable example of differences between male and female birds is in the peafowl; peacocks have magnificent plumage, whereas the female peahen is relatively dull. The peacock's long tail and bright colors evolved to help them attract mates, but having such eye-catching looks can come with negatives such as making them more noticeable to predators. Features like this are beneficial to the males, but may not be beneficial for females, so birds must find a way to evolve different characteristics. We predicted that the secret to these differences must lie in understanding how the same genes are expressed and function differently in males and females." The team studied the genomes of multiple bird species to understand how they expressed these different qualities in males and females. Genes encode proteins, large complex molecules which drive processes in the body and are responsible for the function and structure of the body's tissues. Before genes can be used to make proteins, their DNA sequence is transcribed into RNA, an intermediary molecule that contains the instructions for making proteins.
Login Or Register To Read Full Story
Login Register