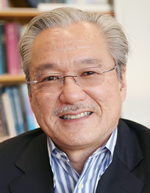 University of Texas (UT) Southwestern Medical Center neuroscientists have identified key cells within the brain that are critical for determining circadian rhythms, the 24-hour processes that control sleep and wake cycles, as well as other important body functions such as hormone production, metabolism, and blood pressure. Circadian rhythms are generated by the suprachiasmatic nucleus (SCN) located within the hypothalamus of the brain, but researchers had previously been unable to pinpoint which of the many thousands of neurons in the region were involved in controlling the body's timekeeping mechanisms. "We have found that a group of SCN neurons that express a neuropeptide called neuromedin S (NMS) is both necessary and sufficient for the control of circadian rhythms," said Dr. Joseph Takahashi (photo), Chairman of Neuroscience and Howard Hughes Medical Institute (HHMI) Investigator at UT Southwestern, who holds the Loyd B. Sands Distinguished Chair in Neuroscience. The findings, published in the March 4, 2015 issue of Neuron, may offer important targets for future treatments of diseases and problems related to circadian dysfunction, which range from jet lag and sleep disorders to neurological problems such as Alzheimer's disease, as well as metabolism issues and psychiatric disorders such as depression. Key studies in the 1970s revealed that the SCN communicates and coordinates cells throughout the body to control circadian rhythms, but the SCN contains many neurons with different expression patterns of neuropeptides and neurotransmitters. "Which of these neurons are responsible for producing circadian rhythms was a major unanswered question in neurobiology. This study marks a significant advancement in our understanding of the body clock" said senior author Dr.
Login Or Register To Read Full Story
Login Register