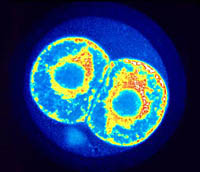 An international group of scientists, led by the University of Granada (UGR) in Spain, has made an unexpected finding about animal cytokinesis, the cellular process that causes the segmentation or division of the cytoplasm to give rise to two daughter cells. This work, which has counted the participation of Canadian researchers and was published on January 6, 2017 in Scientific Reports belonging to Nature Publishing Group, has identified the neuronal apoptosis inhibitory protein (NAIP) throughout cytokinesis. The article is titled “Neuronal Apoptosis Inhibitory Protein (NAIP) Localizes to the Cytokinetic Machinery During Cell Division.” The study basically used microscopic techniques (confocal microscopy and super-resolution microscopy) to show the dynamic of NAIP during the final stages of cell division. The scientists responsible for this study hope that this finding, whose first signs were observed during research that did not address issues about cell division, may lead to other studies that allow a better analysis of the molecular mechanisms that control the final stages of cellular division. As explained by the main author, Francisco Abadía-Molina, Ph.D., from the department of Cellular Biology at the UGR, “Knowing the basic mechanisms that control cell division is fundamental to understand(ing) processes such as development, growth, tissue maintenance, and regeneration, or what are the causes that lead to proliferative pathologies such as cancer, which would allow us to identify new therapeutic targets and strategies."
Login Or Register To Read Full Story
Login Register