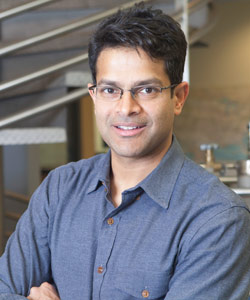 Thin air can reverse brain damage due to mitochondrial defects in mice, new results show. After a month of breathing air that contains about half the usual amount of oxygen, telltale lesions in the brains of these mice had disappeared, Howard Hughes Medical Institute (HHMI) Investigator Vamsi Mootha (photo), MD, and colleagues reported online on May 8, 2017 in PNAS. The article is titled “Hypoxia Treatment Reverses Neurodegenerative Disease in a Mouse Model of Leigh Syndrome.” "We found, much to our surprise and delight, that we could actually reverse advanced disease," Dr. Mootha says. "I don't think anybody thought that these types of neurological diseases could be reversible." It's a remarkable turnaround -- though the result was seen in mice, not humans. More research is needed before a similar approach could be used to treat people, cautions Dr. Mootha, a mitochondrial biologist at Massachusetts General Hospital in Boston. Still, the findings hint at the promise of low oxygen therapy to prevent, or even reverse, mitochondrial disorders in people. One such disorder is Leigh syndrome, a rare disease that often appears in the first few years of life. The disorder is marked by progressive brain lesions, a loss of motor skills, developmental delays, and a failure to grow. Most forms of the disease have no proven treatments. Yet Dr. Mootha and his team had what seems like a counter-intuitive idea. In 2016, the researchers reported that hypoxia, or oxygen deficiency, actually improves the health of mice genetically engineered to have dysfunctional mitochondria, tiny power-producing organelles. Those results, published in Science, were tantalizing, and also raised a number of questions, such as how long these treated mice actually live, and whether hypoxia treatment needs to be continuous. The new findings answer some of these questions. "At a high level, this is exploring the remarkable potential and also the limitations of hypoxia," Dr. Mootha says.
Login Or Register To Read Full Story
Login Register