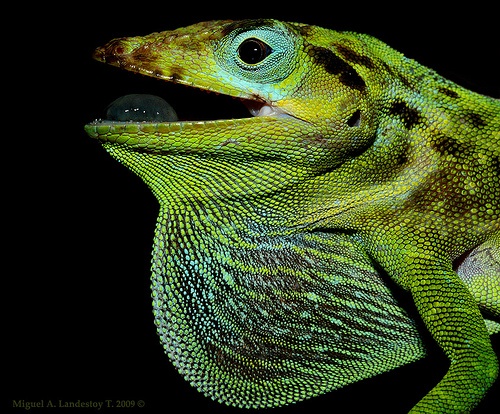 Lizards have special superpowers. While birds can regrow feathers and mammals can regrow skin, lizards can regenerate entire structures such as their tails. Despite these differences, all have evolved from the same ancestor as lizards. Spreading through the Americas, one lizard group, the anoles, evolved like Darwin's finches, adapting to different islands and different habitats on the mainland. Today there are more than 400 species. Constructing a family tree for three lizard species collected in Panama at the Smithsonian Tropical Research Institute (STRI) and a fourth from the southeastern U.S., scientists at Arizona State University (ASU) compared lizard genomes--their entire DNA code--to those of other animals. The researchers discovered that changes in genes involved in the interbrain (the site of the pineal gland and other endocrine glands), for color vision, hormones, and the colorful dewlap that males bob to attract females, may contribute to the formation of boundaries between species. Genes regulating limb development also evolved especially quickly. "While some reptiles, such as tortoises, changed remarkably little over millions of years, anole lizards evolved quickly, generating a diversity of shapes and behaviors," said Dr. Kenro Kusumi, corresponding author and Professor at the ASU School of Life Sciences. "Now that sequencing entire genomes is cheaper and easier, we discovered molecular genetic evidence for rapid evolution that may account for striking differences between bodies of animals living in different environments." The study's findings were published in the February 1, 2018 issue of Genome Biology and Evolution. The open-access article is titled "Comparative Genomics Reveals Accelerated Evolution in Conserved Pathways during the Diversification of Anole Lizards." Dr.
Login Or Register To Read Full Story
Login Register