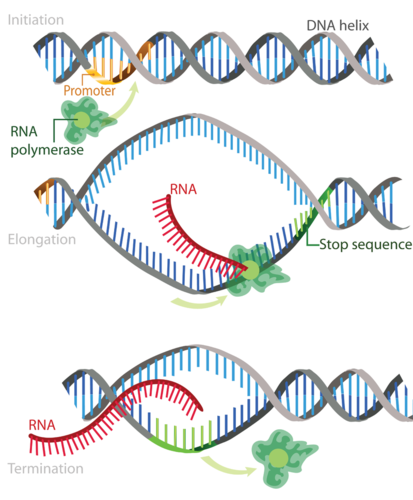 Researchers in human genetics have known that long nucleotide repeats in DNA lead to instability of the genome and ultimately to human hereditary diseases such as Freidreich's ataxia and Huntington's disease. Scientists have believed that the lengthening of those repeats occurs during DNA replication when cells divide or when the cellular DNA repair machinery gets activated. Recently, however, it became apparent that yet another process called transcription (see image), which is copying the information from DNA into RNA, could also been involved. A Tufts University study published online on November 20, 2014 in Cell Reports by a research team led by Dr. Sergei Mirkin, the White Family Professor of Biology at the Tufts School of Arts and Sciences, along with former graduate student Dr. Kartick Shah and graduate students Ryan McGuity and Vera Egorova, explores the relationship between transcription and the expansions of DNA repeats. It concludes that the active transcriptional state of a DNA segment containing a DNA repeat predisposes it for expansions. "There are a great many simple repetitive motifs in our DNA, such as GAAGAAGAA or CGGCGGCGG," says Dr. Mirkin. "They are stable and cause no harm if they stay short. Occasionally, however, they start lengthening compulsively, and these uncontrollable expansions lead to dramatic changes in genome stability, gene expression, which can lead to human disease." In their study, the researchers used baker's yeast to monitor the progress and the fundamental genetic machineries for transcription, replication, and repair in genome functioning. "The beauty of the yeast system is that it provides one with a practically unlimited arsenal of tools to study the mechanisms of genome functioning," says Dr.
Login Or Register To Read Full Story
Login Register