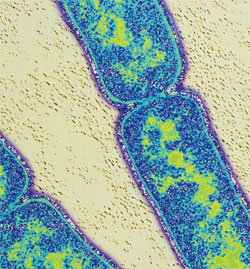 The timing of food intake in the early phase of TB treatment could have a negative impact on the effectiveness of TB treatment. A new study, presented at the European Respiratory Society (ERS) International Congress in Munich on September 7, 2014, suggests that eating food just before taking a TB drug could reduce the effectiveness of the medicine. Researchers conducted a small study looking at 20 patients who were about to begin treatment for TB for the first time. The patients were given the usual course of TB drugs, including isoniazid, rifampicin, pyrazinamide, and ethambutol. The drugs were administered by injection on day one and given orally on days two and three, either while fasting or with a high-carbohydrate meal. Blood samples were taken from each participant and an analytical chemistry technique, called liquid chromatography-tandem mass spectrometry, was used to separate the sample and give information about the chemicals present. This technique allows the researchers to assess concentration levels of the drug and fraction of the unchanged drug that reaches the circulation. Blood samples were taken from the same individual and in the same environment while changing the food intake. The results showed that when the drugs were given with a high-carbohydrate meal, there were lower concentrations of isoniazid, rifampicin, and pyrazinamide in the blood compared with when they were given the drugs in a fasting state. This suggests that eating a high-carbohydrate meal, before taking the drugs can make the drugs less effective. Antonia Morita Iswari, lead author from the Universitas Gadjah Mada in Indonesia and currently completing her Ph.D.
Login Or Register To Read Full Story
Login Register