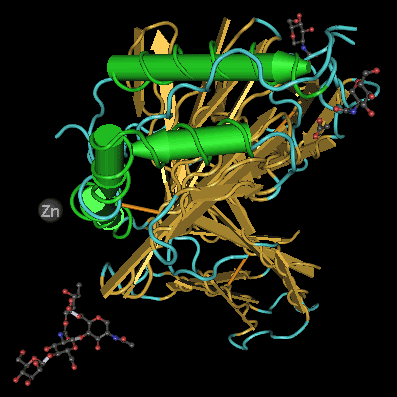 A research group at Bonn University in Germany and international collaborators have discovered a novel receptor, which allows the immune system of modern humans to recognize dangerous invaders, and subsequently elicits an immune response. The blueprint for this advantageous structure was also identified in the genome of Neanderthals, hinting at its origin. The receptor provided these early humans with immunity against local diseases. The presence of this receptor in Europeans but its absence in early men suggests that it was inherited from Neanderthals. The results have been published online on November 8, 2013 in the Journal of Biological Chemistry. When pathogens infect the human body, the immune system identifies and attacks dangerous invaders. During evolution, an efficient defense system developed, which vaguely resembles methods used by secret agents. With the help of certain genes, the human leukocyte antigen (HLA) system produces receptors that assess the risk rate of the pathogens using their profile which has just eight amino acids. "This function can be compared to a text which is identified by a spy as being suspicious, based on just a few letters of a word," says Professor Dr. Norbert Koch from the Institute for Genetics, Department of Immunobiology at the University of Bonn. In order to decipher this message, the immune system breaks down the invader’s proteins into peptides and subsequently scans a proportion of the peptides for their amino acid sequences. Up until now, a total of three different peptide receptors of more than 1000 different manifestations were known, which in humans can read the telltale letter combinations. "This variety is needed so that the immune system can rate the entire spectrum of pathogens relevant for humans," explains Professor Koch.
Login Or Register To Read Full Story
Login Register