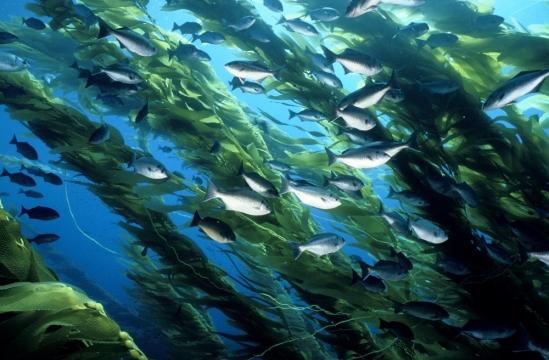 In early 2014, when a large-scale marine heat wave in the Pacific Ocean produced temperature anomalies greater than anything seen since recordkeeping began in the early 1900s, marine scientists saw something else, too: opportunity. Ocean researchers at UC Santa Barbara quickly seized the chance to evaluate the sentinel status of giant kelp forests along the Southern California coastline as an indicator of climate change. They expected forests of giant kelp (Macrocystis pyrifera), known to be sensitive to such increases, as well as to the resulting low-nutrient conditions, to respond quite rapidly to a rise in water temperature. However, to the scientists' surprise, that was not the case. The kelp, they discovered, was all right. Their findings appear in the journal Nature Communications. The article is titled “Extreme Warming Challenges Sentinel Status of Kelp Forests As Indicators of Climate Change.” "The response that we saw in kelp was really no different than what we'd seen in our temporal record," explained lead author Daniel Reed, Ph.D., Deputy Director of UCSB's Marine Science Institute (MSI). "The values were low, but not necessarily lower than what we'd seen during cool-water years." Giant kelp does not have the capacity to store nutrients for very long (only about three weeks), and in the absence of new nutrients, the kelp cannot support its rapid growth of about 2 percent per day. The standing biomass -- the amount of living kelp present at a given time -- is relatively transitory and turns over about seven times a year. "Each frond only lives about three to four months," Dr. Reed said.
Login Or Register To Read Full Story
Login Register