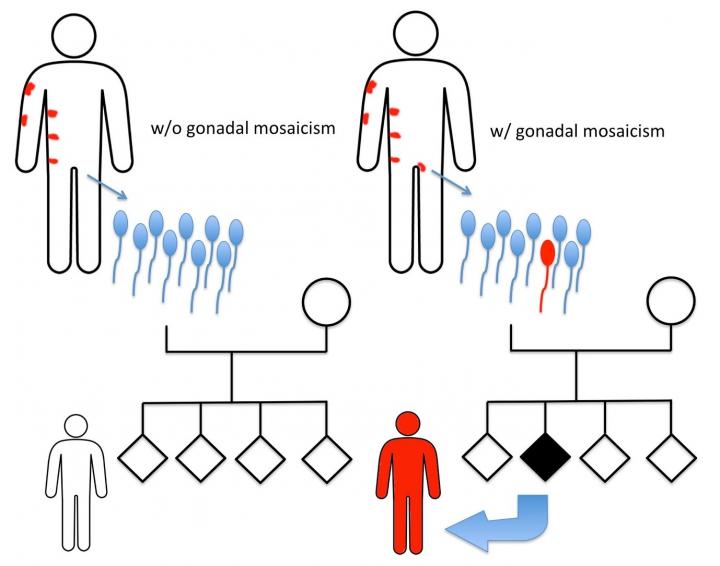 Birthmarks can be caused by an overgrowth of cells in the top layer of skin, as in the case of epidermolytic nevus (EN), which is visible as patches of thickened skin over small areas of the body. Mutations in genes encoding the skin proteins keratin 1 or keratin 10 are responsible for EN, but these mutations only occur in some cell populations of the body so they are known as mosaic. Birthmarks are not usually inherited because the genes of sperm and cells are rarely mutated. However, when inheritance does occur, the children develop skin symptoms identical to their affected parent but covering their entire body. Research at Nagoya University in collaboration with Juntendo University Urayasu Hospital, both in Japan, has led to the identification of one such case of EN in a father that was transmitted to his daughter as a sperm cell (germline) mutation, resulting in the more widespread skin disorder epidermolytic ichthyosis (EI), which affects the whole body. The study was reported online on May 19, 2017 in the Journal of Investigative Dermatology. The article is titled “A Child with Epidermolytic Ichthyosis from a Parent with Epidermolytic Nevus: Risk Evaluation of Transmission from Mosaic to Germline." EI symptoms are obvious from birth as skin redness and blistering that completely covers the body. This worsens over time, with the skin becoming scaly and thickened. Nagoya University researchers clinically diagnosed EI in a 2-year-old Japanese girl, and confirmed her diagnosis with the detection of a mutation in the gene encoding keratin 10. The girl's father had small patches of thickened skin on his hand, abdomen, and groin, affecting just 0.5% of his body surface. "We took a skin sample from one of these areas and identified the identical keratin 10 mutation that we detected in his daughter," co-author Dr. Yasushi Suga says. "This confirmed that the same mutation was causative of EN in the father and had been transmitted to the daughter as EI."
Login Or Register To Read Full Story
Login Register