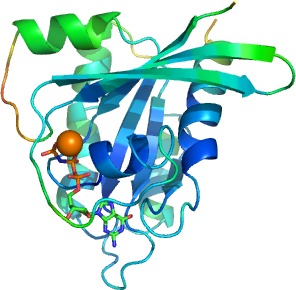 A drug discovery team at Genentech, Inc., has uncovered a chink in the molecular armor of Ras, the most commonly occurring oncogene, which is a gene that when mutated has the potential of causing cancer in humans. The chink, a binding pocket of "functional significance" on the Ras oncoprotein, could provide the long-sought attack point for a therapeutic agent, making the previously "undruggable" Ras oncogene "druggable," the researchers reported on December 4, 2011 at the American Society for Cell Biology's 51st Annual Meeting in Denver, Colorado. The first human oncogene to be identified, Ras is mutated in about 25% of all human tumors. For cancer patients, the presence of an activated Ras oncogene is a marker for poor prognosis. Ras has a molecular on-off switch, activated by the energy transfer molecule GTP. In the "on" position, the oncogene activates critical cell signaling pathways involving cell proliferation, cell migration, and cell differentiation, all of which are in hyper-drive in tumors. To develop a drug that would switch Ras off, scientists needed a binding site, an opening in the Ras oncoprotein to which the docking mechanism of a therapeutic molecule could attach. At the ASCB meeting, Drs. Joachim Rudolph, Weiru Wang, and Guowei Fang, of Genentech, a member of the Roche Group, reported that they identified such a binding pocket by fragment-based lead discovery, a screening process that sorted through 3,300 small molecule compounds. Nuclear magnetic resonance (NMR) spectroscopy was used to pinpoint molecules with even a weak affinity for binding to Ras oncoproteins. The researchers identified 25 compounds, none of which knocked out the oncoprotein. However, NMR spectroscopy revealed that the 25 compounds were binding to the same location on the Ras oncoprotein.
Login Or Register To Read Full Story
Login Register