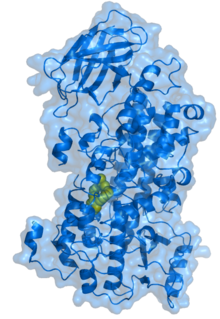 Treatment with an inhibitor of 12/15-lipoxygenase (image), an enzyme elevated in patients with Alzheimer's disease (AD), reverses cognitive decline and neuropathology in an AD mouse model, according to a new study published as a priority communication in the January 15, 2017 issue of Biological Psychiatry. The article is titled “12/15-Lipoxygenase Inhibition Reverses Cognitive Impairment, Brain Amyloidosis, and Tau Pathology by Stimulating Autophagy in Aged Triple Transgenic Mice.” The positive effects of the inhibitor were observed after the AD-like phenotype was already established in the mice, which is promising for the inhibitor’s potential therapeutic use, as neuropathology tends to develop many years before the appearance of AD symptoms in patients. The study, by senior author Domenico Praticò, Ph.D., and colleagues at Temple University in Philadelphia, Pennsylvania, offers some hope for a new treatment for patients with AD, who currently have no effective therapy options. Past research has focused on prevention of the disease by reducing the levels of proteins that cause brain plaques and tangles and kill nerve cells. "In this exciting new study, the authors provide support for a new experimental treatment approach that works by helping nerve cells digest toxic proteins that might otherwise cause cell death," said John Krystal, Editor of Biological Psychiatry. First author Antonio Di Meco, Ph.D., and colleagues used a triple transgenic (3xTg) mouse model that displays an AD-like phenotype, including cognitive decline, and Aβ and tau neuropathology characteristic of the disease in humans. The scientists had already shown that early administration of the 12/15-lipoxygenase inhibitor PD146176 could prevent the onset of these features in mice.
Login Or Register To Read Full Story
Login Register