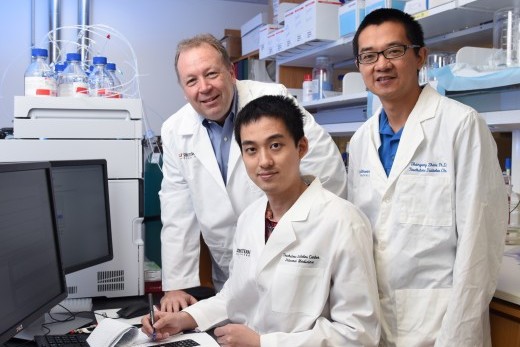 When exposed to cold, clusters of cells within the body’s white fat become beige – a color change that reflects the creation of more energy-producing mitochondria, cellular components that enable cells to burn calories and give off heat. But because white fat cells have very few nerves, how do beige fat cells get the message that it’s cold outside? In research that has implications for diabetes and other metabolic diseases, an international study based at the University of Texas (UT) Southwestern Medical Center found that the protein connexin 43 (Cx43) forms cell-to-cell communication channels on the surface of emerging beige fat cells that amplify the signals from those few nerve fibers. The channels act like conduits that speed signals across the gaps between clusters of cells – similar to the way a group email reaches several people at once. The study, published in the September 13, 2016 issue of Cell Metabolism, also found that beige fat, unlike the better-known white and brown fat, has interesting anti-diabetic effects on blood sugar metabolism that seem independent of temperature regulation. Impaired glucose metabolism is a hallmark of diabetes. “The data here show how white fat cells can make maximal use of their limited number of nerves to allow a single nerve fiber to spread the ‘message’ about cold temperatures amongst the connected cells,” explained Dr. Philipp Scherer, lead author of the study and Director of UT Southwestern’s Touchstone Center for Diabetes Research. The Cell Metabolism article is titled “Connexin 43 Mediates White Adipose Tissue Beiging by Facilitating the Propagation of Sympathetic Neuronal Signals.” “To my knowledge, this is the first time that any fat’s thermal regulatory (warming) and metabolic effects on blood sugar have been observed to work independently.
Login Or Register To Read Full Story
Login Register