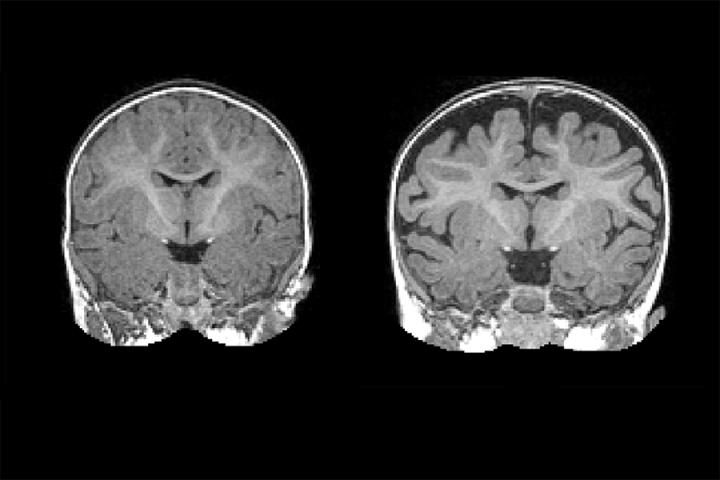 A national research network led by the University of North Carolina (UNC) School of Medicine's Joseph Piven, M.D., found that many toddlers diagnosed with autism at two years of age had a substantially greater amount of extra-axial cerebrospinal fluid (CSF) at 6 and 12 months of age, before diagnosis is possible. They also found that the more CSF at six months - as measured through MRIs - the more severe the autism symptoms were at two years of age. "The CSF is easy to see on standard MRIs and points to a potential biomarker of autism before symptoms appear years later," said Dr. Piven, co-senior author of the study, the Thomas E. Castelloe Distinguished Professor of Psychiatry, and Director of the Carolina Institute for Developmental Disabilities (CIDD). "We also think this finding provides a potential therapeutic target for a subset of people with autism." The findings, published online on March 6, 2016 in Biological Psychiatry, point to faulty CSF flow as one of the possible causes of autism for a large subset of people. The article is titled “Increased Extra-axial Cerebrospinal Fluid in High-Risk Infants who Later Develop Autism.” "We know that CSF is very important for brain health, and our data suggest that in this large subset of kids, the fluid is not flowing properly," said Mark Shen, Ph.D., CIDD postdoctoral fellow and first author of the study. "We don't expect there's a single mechanism that explains the cause of the condition for every child. But we think improper CSF flow could be one important mechanism." Until the last decade, the scientific and medical communities viewed CSF as merely a protective layer of fluid between the brain and skull, not necessarily important for proper brain development and behavioral health.
Login Or Register To Read Full Story
Login Register