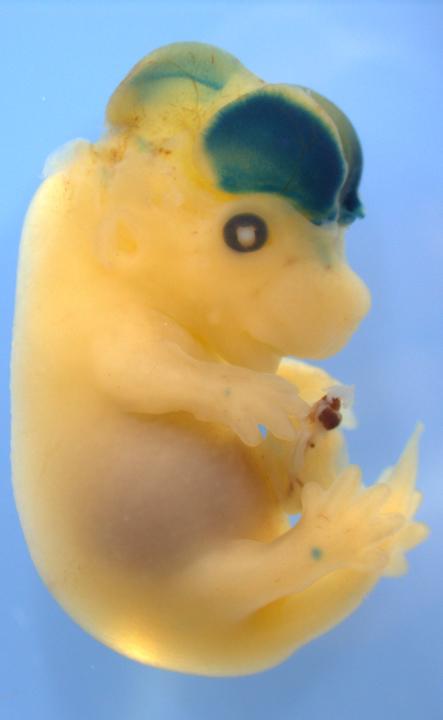 The size of the human brain expanded dramatically during the course of evolution, giving humans unique capabilities such as the abilities to use abstract language and do complex math. But how did the human brain get larger than that of our closest living relative, the chimpanzee, if almost all of our genes are the same? Duke scientists have shown that it is possible to pick out key changes in the genetic code between chimpanzees and humans and then visualize their respective contributions of those changes to early brain development by using mouse embryos. The team found that humans are equipped with tiny differences in a particular regulator of gene activity, called HARE5, that, when introduced into a mouse embryo, led to a 12% bigger brain than the brain that developed in mouse embryos treated with the corresponding HARE5 sequence from chimpanzees. These findings, which were published online on February 19, 2015 in Current Biology, may lend insight, not only into what makes the human brain special, but also to why people get some diseases, such as autism and Alzheimer’s disease, whereas chimpanzees do not. “I think we’ve just scratched the surface, in terms of what we can gain from this sort of study,” said Debra Silver, Ph.D., an Assistant Professor of Molecular Genetics and Microbiology in the Duke University Medical School and an Investigator in the Duke Institute for Brain Sciences. “There are some other really compelling candidates [in addition to HARE5] that we found that may also lead us to a better understanding of the uniqueness of the human brain.” The Current Biology article is titled “Human-Chimpanzee Differences in a FZD8 Enhancer Alter Cell-Cycle Dynamics in the Developing Neocortex.”
Login Or Register To Read Full Story
Login Register