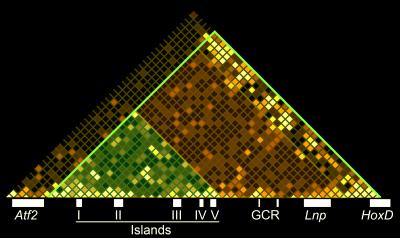 The genes that are involved in the development of the fetus are activated in different tissues and at different times. Their expression is carefully regulated by so-called "enhancer sequences,” which are often located far from their target genes, and this expression requires the DNA molecule to loop around and bring the enhancer sequences in close proximity to their target genes. Such 3D changes of the DNA are in turn controlled by other sequences called topologically associating domains (TADs). École Polytechnique Fédérale de Lausanne (EPFL) scientists have now studied the TADs involved in digit development in the fetus and have gained insights regarding some of the important questions surrounding them. The work was published online on August 7, 2017 in Genome Biology. The open-access article is titled “Large Scale Genomic Reorganization of Topological Domains at The Hoxd Locus.” TADs are portions of the DNA molecule that divide the entire genome of an organism into manageable chunks, like districts in a city. Inside the cell, the vast amount of DNA is packaged into chromatin and chromatin is packaged into the familiar chromosomes. Inside every TAD, there exist genes as well as the elements that regulate them, all packaged together and insulated from genes and regulators in neighboring TADs, like channels or walls that separate city districts. Breaking down the boundaries set by TADs leads to a number of disorders such as colon, esophagus, brain, and blood cancers. But despite their importance, we know little about these boundaries, which confer to a TAD its structure. This raises the question:
Login Or Register To Read Full Story
Login Register