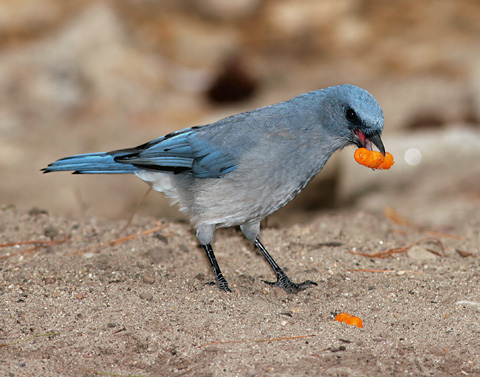 Many animals feed on seeds, acorns, or nuts. The common feature of these foods are that they have shells and there is no direct way to know what's inside. How do the animals know how much and what quality of food is hidden within? A simple solution would be to break the shells, which often takes time and effort -- it would be a big disappointment to know that it's rotten or bad after the hard effort of opening the nuts! Can animals evaluate the food hidden inside the nuts? This is especially important for some animals who cache the food items for later use without opening and checking each item. We can detect which one is heavier by moving the items up and down several times and focusing on the "feeling of heaviness" we perceive. Humans can also detect the quality of a water melon by knocking on it. A new study published in Journal of Ornithology suggests that some birds can also use similar tricks in choosing which peanuts to pick from the feeder. The article is titled “Proximate Mechanisms of Detecting Nut Properties in a Wild Population of Mexican Jays (Aphelocoma ultramarina).” The study was carried out in Arizona by an international research team from Poland and Korea, and it revealed that the Mexican Jays (Aphelocoma wollweberi) may be able to "weigh" peanuts and may even be able "listen to" peanuts while handling them in their beaks. Dr. Sang-im Lee, Dr. Piotr Jablonski, Dr. Maciej Fuszara, and Dr. Elzbieta Fuszara, the leading researchers on this study, together with their students and helpers, spent many hours delicately opening shells of hundreds of peanuts, changing the contents and then presenting them to the jays in order to see if the birds can figure out the differences in the content of identical-looking peanut pods (peanuts in the shell).
Login Or Register To Read Full Story
Login Register