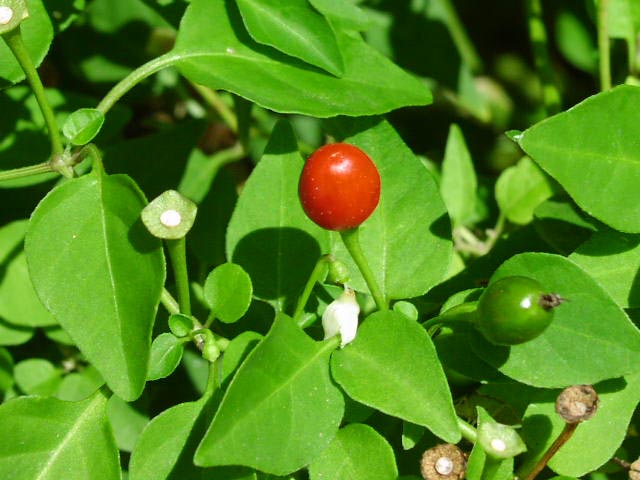 An article by Pat Bailey in the January 19 issue of The Davis Enterprise reports on the sequencing of the hot pepper (Capsicum annuum)(image) genome by a large international team, which included scientists from the University of California-Davis and Seoul National University in Korea. The research was published online on January 19, 2014 in an open-access article in Nature Genetics. According to Bailey, the new genome sheds light on the biology of the pepper’s characteristic spiciness, as well as its fruit-ripening and disease-resistance mechanisms. In addition, the genome data reveals new information v ital. for improving the horticultural, nutritional, and medicinal qualities of these peppers, for which the annual global production has grown more than 40-fold in the last two decades and now is greater than $14.4 billion. According to Bailey’s article, the researchers sequenced a hot pepper landrace, or domesticated variety, from the Mexican state of Morelos. The variety, known as Criolo de Morelos 334, has consistently exhibited high levels of disease resistance and has been extensively used in hot-pepper research and breeding. The research team also provided sequencing data for the Perennial and Dempsey cultivated pepper varieties and for the related habanero pepper species (Capsicum chinense). The sequencing also uncovered evidence suggesting that the pungency, or “heat,” of the hot pepper originated through the evolution of new genes by duplication of existing genes and changes in gene expression after the peppers evolved into species. Bailey said that it was already known that pepper pungency was caused by the accumulation of naturally occurring chemicals called capsaicinoids, unique to the Capsicum genus.
Login Or Register To Read Full Story
Login Register