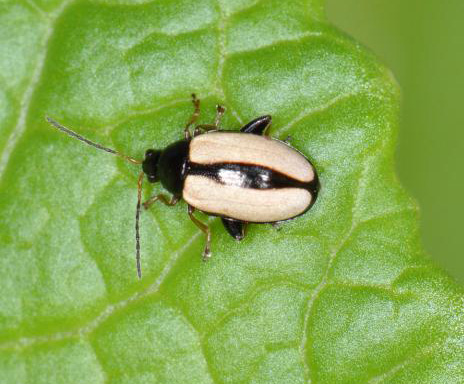 When horseradish flea beetles (photo) feed on their host plants, they take up not only nutrients but also mustard oil glucosides, the characteristic defense compounds of horseradish and other brassicaceous plants. Using these mustard oil glucosides, the beetles turn themselves into a "mustard oil bomb" and so deter predators. A team of researchers from the Max Planck Institute for Chemical Ecology in Jena, Germany, has now been able to demonstrate how the beetle regulates the accumulation of mustard oil glucosides in its body. The beetles have special transporters in the excretory system that prevent the excretion of mustard oil glucosides. This mechanism enables the horseradish flea beetle to accumulate high amounts of the plant toxins in its body, which it uses for its own defense. The new results were published online on May11, 2021 in Nature Communications. The open-access article is titled “Sugar Transporters Enable a Leaf Beetle to Accumulate Plant Defense Compounds” (https://www.nature.com/articles/s41467-021-22982-8). Many animals use chemical defense compounds to deter predators. These defense compounds are either produced by the animal itself or by symbionts of the animal, or they are acquired from the diet. The ability to acquire defense compounds from the diet is particularly widespread in insects that feed on toxic plants. One example is the horseradish flea beetle (Phyllotreta armoraciae), which can sequester mustard oil glucosides, also known as glucosinolates, in its body. "The horseradish flea beetle belongs to an economically important group of insects, because several Phyllotreta species are crop pests. This beetle, which can accumulate vast amounts of host plant glucosinolates, regulates the levels and composition of glucosinolates in the body at least partially by excretion. This suggested that Phyllotreta armoraciae possesses very efficient transport and storage mechanisms, which we wanted to uncover," says first author Zhi-Ling Yang, PhD, explaining the goal of the new study.
Login Or Register To Read Full Story
Login Register