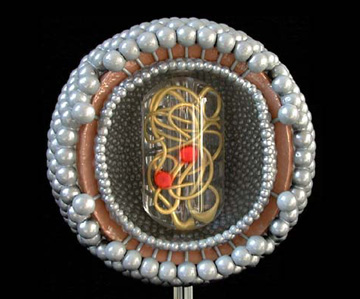 The human immunodeficiency virus (HIV), the cause of AIDS, makes use of the base excision repair pathway when inserting its DNA into the host-cell genome, according to a new study led by researchers at the Ohio State University Comprehensive Cancer Center – Arthur G. James Cancer Hospital and Richard J. Solove Research Institute. Crippling the repair pathway prevents the virus from completing this critical step in the retrovirus's life cycle. The findings offer potential new targets for novel anti-HIV drugs that may not lead as quickly to viral resistance as current drugs, the researchers say. "HIV continues to develop resistance to current therapies," says first author Dr. Kristine Yoder, assistant professor of molecular virology, immunology, and medical genetics. "But the proteins we talk about in this paper are made by the cell, so drugs that target them might not lead to resistance as quickly as drugs that target viral proteins. And while targeting host proteins does have the potential for side effects, studies of mice suggest that targeting some of these genes may not lead to significant side effects." The paper was published online on March 23, 2011, in the journal PLoS ONE. Cells normally use base excision repair to fix oxidative damage to DNA caused by reactive molecules such as hydrogen peroxide and oxygen radicals, which form during energy production and other metabolic processes. For this study, Dr. Yoder and her colleagues investigated the role of the repair pathway in the virus insertion process by engineering four strains of mouse fibroblast cells that each lacked a component of the pathway. Specifically, they deleted genes for three glycosylase enzymes – Ogg1, Myh, and Neil1 – and one polymerase gene, Pol-beta.
Login Or Register To Read Full Story
Login Register