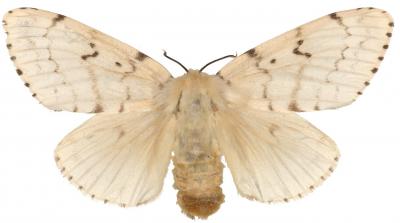 The European gypsy moth (EGM) is perhaps the country's most famous invasive insect, a nonnative species accidentally introduced to North America in the 1860s when a few escaped from a breeding experiment in suburban Boston. The caterpillars have been slowly eating their way across the continent ever since, causing widespread defoliation. In research that could lead to better bioinsecticides to protect forests and orchards, Drs. Don Gammon and Nick Grishin of the University of Texas (UT) Southwestern have sequenced the genomes of the EGM and its even more destructive cousin, the Asian gypsy moth (AGM). Their work, published in the January 29, 2019 issue of PNAS, reveals that the gypsy moth has the largest moth or butterfly genome (number of DNA base pairs) ever sequenced. The PNAS article is titled “Gypsy Moth Genome Provides Insights into Flight Capability and Virus–Host Interactions.” "The European gypsy moth has spread as far west as Minnesota and as far south as North Carolina. The rather slow spread (about 13 miles a year) is partly due to the fact that EGM females are flightless and must walk or be blown by the wind to disperse," said Dr. Gammon, Assistant Professor of Microbiology and a W.W. Caruth, Jr. Scholar in Biomedical Research at UT Southwestern. "In contrast, females of the Asian gypsy moth subspecies, which inhabits Asia and eastern Russia, have larger, more developed wings, and can fly." If the Asian gypsy moth were to become established in the United States, it would pose an even greater economic threat due to its ability to spread more swiftly, Dr. Gammon added. To guard against that possibility, the US Department of Agriculture has surveillance programs at several ports and regularly sprays virus-based bioinsecticides in endangered forests to kill gypsy moth caterpillars.
Login Or Register To Read Full Story
Login Register