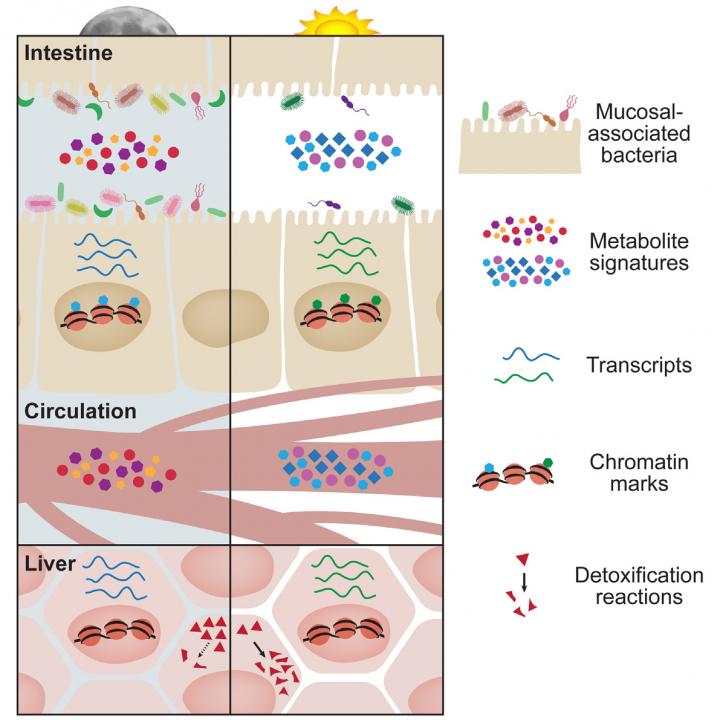 Even gut microbes have a routine. Like clockwork, they start their day in one part of the intestinal lining, move a few micrometers to the left, maybe the right, and then return to their original position. New research in mice now reveals that the regular timing of these small movements can influence a host animal's circadian rhythms by exposing gut tissue to different microbes and their metabolites as the day goes by. Disruption of this dance can affect the host. The study was published online on December 1, 2016 in Cell. The article is titled: “Microbiota Diurnal Rhythmicity Programs Host Transcriptome Oscillations." "This research highlights how interconnected the behavior is between prokaryotes and eukaryotes, between mammalian organisms and the microbes that live inside them," says Eran Elinav, Ph.D., an immunologist at the Weizmann Institute of Science, who led the work with co-senior author Eran Segal, Ph.D., a computational biologist, also at the Weizmann. "These groups interact with and are affected by each other in a way that can't be separated." The new study had three major findings: 1. The microbiome on the surface layer of the gut undergoes rhythmical changes in its "biogeographical" localization throughout the day and night; thus, the surface cells are exposed to different numbers and different species of bacteria over the course of a day. "This tango between the two partners adds mechanistic insight into this relationship," Dr. Elinav says. 2. The circadian changes of the gut microbiome have profound effects on host physiology, and unexpectedly, they affect tissue that is far away from the gut, such as the liver, whose gene expression changes in tandem with the gut microbiome rhythmicity. "As such," adds Dr.
Login Or Register To Read Full Story
Login Register