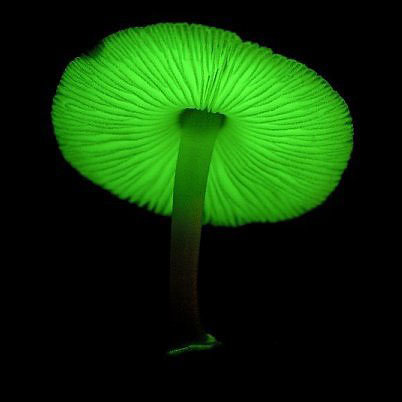 Did you know that there are mushrooms that actually glow? Aristotle was aware of this intriguing fact more than 2,000 years ago. He also was the first person to ask a simple question in print: Why? Now, researchers reporting online in Current Biology on March 19, 2015 finally have a good answer. The title of the article is “Circadian Control Sheds Light on Fungal Bioluminescence." The light emitted from those fungi attracts the attention of insects, including beetles, flies, wasps, and ants. Those insect visitors are apparently good for the fungi because they spread the fungal spores around. The new study also shows that the mushrooms' bioluminescence is under the control of the circadian clock. In fact, it was that discovery that led the researchers to suspect that the mushrooms' light must serve some useful purpose. "Regulation implies an adaptive function for bioluminescence," explains Dr. Jay Dunlap of Dartmouth's Geisel School of Medicine. "It appears that fungi make light so they are noticed by insects that can help the fungus colonize new habitats," says Dr. Cassius Stevani of Brazil's Instituto de Química-Universidade de São Paulo. The circadian control of bioluminescence makes the process more efficient. There are many examples of living things that generate light in various ways. Among bioluminescent organisms, fungi are the rarest and least well understood. Only 71 of more than 100,000 described fungal species produce green light in a biochemical process that requires oxygen and energy. Researchers had believed in most cases that fungi produce light around the clock, suggesting that perhaps it was a simple, if expensive, metabolic byproduct. The new work led by Dr. Dunlap and Dr.
Login Or Register To Read Full Story
Login Register