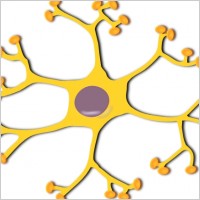 The brain is a coding machine: it translates physical inputs from the world into visual, olfactory, auditory, tactile perceptions via the mysterious language of its nerve cells and the networks which they form. Neural codes could in principle take many forms, but in regions forming bottlenecks for information flow (e.g., the optic nerve) or in areas important for memory, sparse codes are highly desirable. Scientists at the Max Planck Institute for Brain Research in Frankfurt have now discovered a single neuron in the brain of locusts that enables the adaptive regulation of sparseness in olfactory codes. This single giant interneuron tracks in real time the activity of several tens of thousands of neurons in an olfactory center and feeds inhibition back onto all of them, so as to maintain their collective output within an appropriately sparse regimen. In this way, representation sparseness remains steady as input intensity or complexity varies. Signals from the world (electromagnetic waves, pressure, chemicals etc) are converted to electrical activity in sensory neurons and processed by neuronal networks in the brain. Insects sense smells via their antennae. Odors are detected by sensory neurons there, and olfactory data are then sent to and processed by the antennal lobes and a region of the brain known as the mushroom bodies. Neurons in the antennal lobes tend to be “promiscuous:” odors are thus represented by specific combinations of neuronal activity. Neurons in the mushroom bodies—they are called Kenyon cells—, however, respond with great specificity and thus extremely rarely. In addition, they generally respond with fewer than three electrical impulses when stimulated with the right odor.
Login Or Register To Read Full Story
Login Register