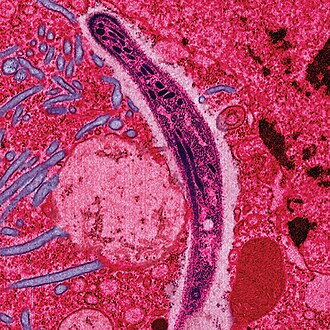 Despite great efforts in medicine and science, more than 400,000 people worldwide are still dying of malaria. The infectious disease is transmitted by the bite of mosquitoes infected with the malaria parasite Plasmodium (image). The genome of the parasite is relatively small, with about 5,000 genes. In contrast to human cells, Plasmodium parasites only have a single copy of each individual gene. If one removes a gene from the entire genome of the parasite, this leads therefore directly to a change in the phenotype of the parasite. An international consortium led by Professors Volker Heussler from the Institute of Cell Biology (ICB) at the University of Bern and Oliver Billker from the Umeå University in Sweden and formerly at the Sanger Institute in Great Britain has taken advantage of this fact. The researchers have carried out a genome-wide gene deletion study on malaria parasites: They specifically removed over 1300 individual genes, observed the effects during the entire life cycle of the parasite and were thus able to identify many new targets in the pathogen. The present study was published in the November 14, 2019 issue of Cell. The open-access article is titled “Genome-Scale Identification of Essential Metabolic Processes for Targeting the Plasmodium Liver Stage.” The researchers used a malaria mouse model established at the Institute of Cell Biology at the University of Bern. Each of the 1,300 parasite genes was replaced by an individual genetic code to analyze how the removal of the individual genes affects the parasite. The use of individual codes allows the scientists to study many parasites simultaneously and thus drastically shortens the time of their analysis.
Login Or Register To Read Full Story
Login Register