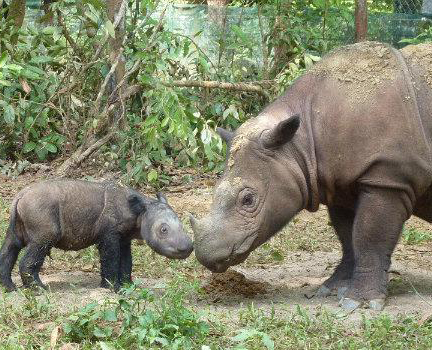 A study led by researchers at the Centre for Palaeogenetics in Stockholm shows that the last remaining populations of the Sumatran rhinoceros display surprisingly low levels of inbreeding. The researchers sequenced the genomes from 21 modern and historical rhinoceros' specimens, which enabled them to investigate the genetic health in rhinos living today, as well as a population that recently became extinct. These findings are published online on April 26, 2021 in Nature Communications. The open-access article is titled “Genomic Insights into the Conservation Status of the World’s Last Remaining Sumatran Rhinoceros Populations” (https://www.nature.com/articles/s41467-021-22386-8). With fewer than 100 individuals remaining, the Sumatran rhinoceros is one of the most endangered mammal species in the world. Recent reports of health issues and low fecundity have raised fears that the remaining populations are suffering from inbreeding problems. However, very little has been known about the genetic status of these enigmatic rhinos. To investigate whether the Sumatran rhinoceros is threatened by genetic factors, the researchers sequenced the genomes from 16 individuals representing the present-day populations on Borneo and Sumatra and the recently extinct population on the Malaysian Peninsula. This enabled them to estimate inbreeding levels, genetic variation, and the frequency of potentially harmful mutations in the populations. Moreover, by also sequencing the genomes from five historical samples, the researchers could investigate the genetic consequences of the severe population decline of the past 100 years. "To our surprise, we found relatively low inbreeding levels and high genetic diversity in the present-day populations on Borneo and Sumatra,” says Johanna von Seth, PhD student at the Centre for Palaeogenetics and co-lead author on the paper.
Login Or Register To Read Full Story
Login Register