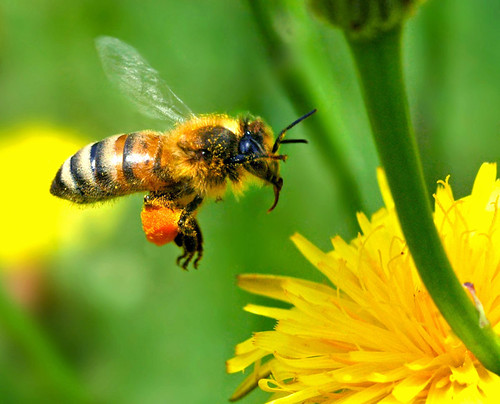 Researchers at the USDA’s Agricultural Research Service, and colleagues, have reported the draft sequencing of the genome of a parasite that can kill honey bees. The parasite, Nosema ceranae, is one of many pathogens suspected of being responsible for the current decline in honey bee populations. This decline has been attributed to what is called colony collapse disorder (CCD). In 2006, CCD began devastating commercial beekeeping operations, with some beekeepers reporting losses of up to 90 percent, according to the USDA. Researchers believe CCD may be the result of a combination of pathogens, parasites, and stress factors, but the cause remains elusive. At stake are honey bees that play a valuable part in a $15 billion industry of crop farming in the United States. The microsporidian Nosema is a fungus-related microbe that produces spores that bees consume when they forage. Infection spreads from the bee’s digestive tract to other tissues. Within weeks, colonies are either wiped out or lose much of their strength. One Nosema species, Nosema apis, was the leading cause of microsporidia infections among domestic bee colonies until recently, when N. ceranae jumped from Asian honey bees to the European honey bees used commercially in the United States. Sequencing the N. ceranae genome should help scientists trace the parasite's migration patterns, determine how it became dominant, and help resolve the spread of infection by enabling the development of diagnostic tests and treatments. This work was published June 5 in PLoS Pathogens. [Press release] [PLoS Pathogens article]
Login Or Register To Read Full Story
Login Register