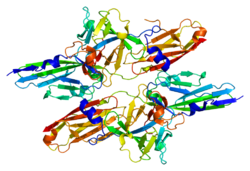 During embryo development, genes are dynamically, and very precisely, switched on and off to confer different properties to different cells and build a well-proportioned and healthy animal. Fgf8 is one of the key genes in this process, controlling in particular the growth of the limbs and the formation of the different regions of the brain. Researchers at the European Molecular Biology Laboratory (EMBL) have elucidated how Fgf8 in mammal embryos is, itself, controlled by a series of multiple, interdependent regulatory elements. Their findings, published online on February 28, 2013 in Developmental Cell, shed new light on the importance of the genome structure for gene regulation. Fgf8 is controlled by a large number of regulatory elements that are clustered in the same large region of the genome and are interspersed with other, unrelated genes. Both the sequences and the intricate genomic arrangement of these elements have remained very stable throughout evolution, thus proving their importance. By selectively changing the relative positioning of the regulatory elements, the researchers were able to modify their combined impact on Fgf8, and therefore drastically affect the embryo. “We showed that the surprisingly complex organization of this genomic region is a key aspect of the regulation of Fgf8,” explains Dr. François Spitz, who led the study at EMBL. “Fgf8 responds to the input of specific regulatory elements, and not to others, because it sits at a special place, not because it is a special gene. How the regulatory elements contribute to activate a gene is not determined by a specific recognition tag, but by where precisely the gene is in the genome.” Scientists are still looking into the molecular details of this regulatory mechanism.
Login Or Register To Read Full Story
Login Register