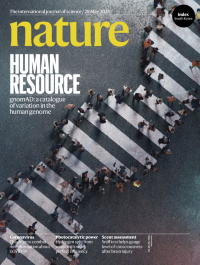 Analyses of the largest publicly available catalog of human genomic data reveal new details on rare types of genetic variation and provide better tools for genetic disease diagnosis and drug development. For the last eight years, the Genome Aggregation Database (gnomAD) Consortium (and its predecessor, the Exome Aggregation Consortium, or ExAC), has been working with geneticists around the world to compile and study more than 125,000 exomes and 15,000 whole genomes from populations around the world. Now, on May 27, 2020, in seven open-access papers published in Nature, Nature Communications, and Nature Medicine, gnomAD Consortium scientists describe their first set of discoveries from the database, showing the power of this vast collection of data. Together the studies: (1) present a more complete catalog and understanding of a class of rare genetic variation called loss-of-function (LoF) variants, which are thought to disrupt genes' encoded proteins; (2) introduce the largest comprehensive reference map of an understudied yet important class of genetic variation called structural variants; (3) show how tools that account for unique forms of variation and variants' biological context can help clinical geneticists when trying to diagnose patients with rare genetic diseases; and (4) illustrate how population-scale datasets like gnomAD can help evaluate proposed drug targets. Researchers at the Broad Institute of MIT and Harvard and Massachusetts General Hospital (MGH) served as co-first or co-senior authors on all of the studies, with scientists from Imperial College London in the United Kingdom, the direct-to-consumer genetics company 23andMe, and other institutions contributing to individual papers.
Login Or Register To Read Full Story
Login Register