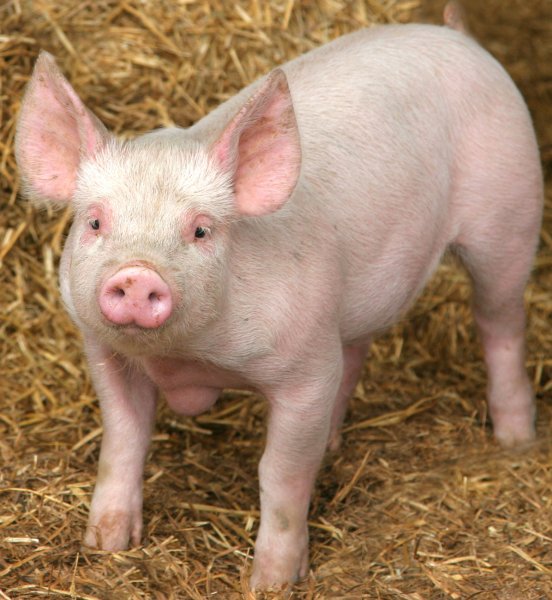 A collaborative discovery involving Kansas State University researchers may improve animal health and save the U.S. pork industry millions of dollars each year. Dr. Raymond "Bob" Rowland, a virologist and professor of diagnostic medicine and pathobiology, was part of the collaborative effort that discovered a genetic marker that identifies pigs with reduced susceptibility to porcine reproductive and respiratory syndrome, or PRRS, caused by the PRRS virus. PRRS costs the U.S. pork industry more than $600 million each year. "This discovery is what you call a first-first," Dr. Rowland said. "This discovery is the first of its kind for PRRS, but also for any large food animal infectious disease. I have worked in the field for 20 years and this is one of the biggest advances I have seen." Dr. Rowland and researchers Dr. Jack Dekkers from Iowa State University and Dr. Joan Lunney from the Agricultural Research Service discovered a genetic marker called a quantitative trait locus, or QTL, that is associated with PRRS virus susceptibility. This discovery is a first step in controlling and eliminating the virus. The research appeared online on December 28, 2011 in the Journal of Animal Science. The project's beginning and future center around Kansas State University, Dr. Rowland said. It begins at the university because Dr. Rowland is involved with an organization called the PRRS Host Genetics Consortium, or PHGC, which initiated and provided more than $5 million for the research. Dr. Rowland is co-director of the consortium, which is a collaboration among the United States Department of Agriculture, the National Pork Board, and Genome Canada, as well as various universities and industry members. Dr. Rowland is also director of the USDA-funded PRRS Coordinated Agriculture Project, known as PRRS CAP.
Login Or Register To Read Full Story
Login Register