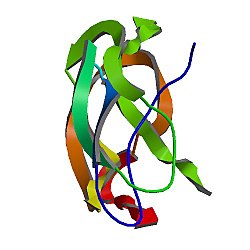 In recent years, it has become clear that people with diabetes face an ominous prospect – a far greater risk of developing Alzheimer's disease. Now researchers at The City College of New York (CCNY) have shed light on one reason why. Biology Professor Chris Li and her colleagues have discovered that a single gene forms a common link between the two diseases. They found that the gene, known to be present in many Alzheimer's disease cases, affects the insulin pathway. Disruption of this pathway is a hallmark of diabetes. The finding could point to a therapeutic target for both diseases. The researchers report their finding in the June 2012 issue of Genetics. "People with type 2 diabetes have an increased risk of dementia. The insulin pathways are involved in many metabolic processes, including helping to keep the nervous system healthy," said Professor Li, explaining why the link is not far-fetched. Although the cause of Alzheimer's is still unclear, one criterion for diagnosis of the disease after death is the presence of sticky plaques of amyloid protein in decimated portions of patients' brains. Mutations in the human "amyloid precursor protein" (APP) gene, or in genes that process APP, show up in cases of Alzheimer's that run in families. In the study, Professor Li and her colleagues scrutinized a protein called APL-1, made by a gene in the worm Caenorhabditis elegans (C. elegans) that happens to be a perfect stand-in for the human Alzheimer's disease gene. "What we found was that mutations in the worm-equivalent of the APP gene slowed their development, which suggested that some metabolic pathway was disrupted," said Professor Li.
Login Or Register To Read Full Story
Login Register