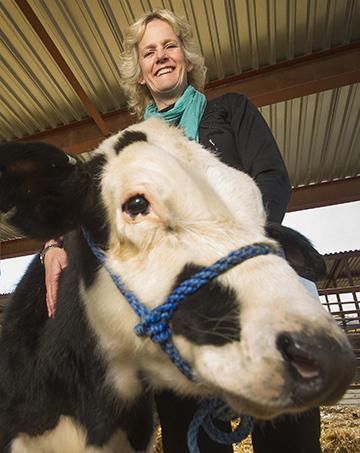 Gene editing -- one of the newest and most promising tools of biotechnology -- enables animal breeders to make beneficial genetic changes, without bringing along unwanted genetic changes. And, following in the footsteps of traditional breeding, gene editing has tremendous potential to boost the sustainability of livestock production, while also enhancing food-animal health and welfare, argues University of California (UC) Davis animal scientist Dr. Alison Van Eenennaam. She examined the potential benefits of genome editing on Friday, February 17, 2017 at the annual meeting of the American Association for the Advancement of Science, to be held in Boston's Hynes Convention Center. Her presentation was part of a 3 p.m. EST session titled "The Potential of Gene Editing to Revolutionize Agriculture," moderated by acclaimed molecular biologist Dr. Nina Federoff. Dr. Van Eenennaam was also scheduled to participate in a news briefing on this topic at noon EST on Saturday, February 18, 2017 in Room 103 of the convention center. Thanks to improvements made in the dairy industry through traditional breeding, a glass of milk today is associated with just one third of the greenhouse gas emissions linked to producing a glass of milk in the 1940s, says Dr. Van Eenennaam, a UC Cooperative Extension biotechnology specialist in the UC Davis Department of Animal Science. That was accomplished as traditional selective breeding improved the productivity of dairy cows so much that the number of dairy cows in the United States dropped from a high of 25.6 million in 1944 to about 9 million today, even as the country experienced a 1.6-fold increase in total milk production, she says.
Login Or Register To Read Full Story
Login Register