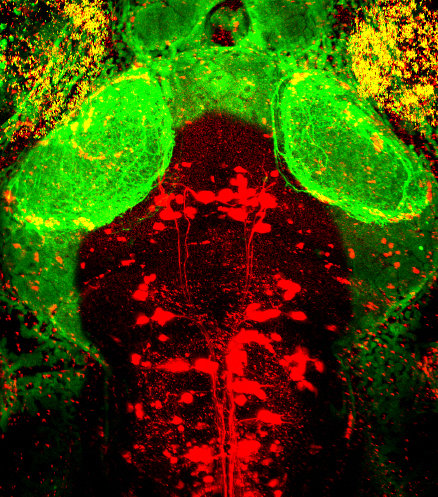 A new study from SciLifeLab at Uppsala University in Sweden shows that genes crucial for vision were multiplied in the early stages of vertebrate evolution and acquired distinct functions leading to the sophisticated mechanisms of vertebrate eyes. One striking feature of vertebrates is the prominent role that vision plays in almost all major animal groups. The vertebrate eye has a unique organization and is known to have arisen at the time of the first vertebrates over 500 million years ago. A new study by the research team led by Dr. Xesús Abalo and Dr. Dan Larhammar explains how ancient gene duplications have played decisive roles in the evolution of novel functions. The first step in vision is the response to light by the cone and rod cells in the retina at the back of the eye. Twenty years ago, the first studies of the light receptors, proteins called opsins, in birds indicated that color vision arose before the dim light black-and-white vision provided by rods. This hypothesis was recently confirmed by detailed studies of opsin genes in a broad range of vertebrate species (David Lagman and Daniel Ocampo Daza in the team of Abalo & Larhammar, open-access, http://www.biomedcentral.com/1471-2148/13/238). The authors found that new opsin genes were generated when the genome of the vertebrate ancestor was doubled twice at the dawn of the vertebrates. These massive gene duplication events resulted in many novel functions, not only for vision, but also for many other characteristic vertebrate features. In the new study, Dr. Lagman and co-workers describe evolutionary changes in the first relay step in the vision cascade, mediated by a family of G-proteins called transducins. These trigger the cellular response by activating a critical enzyme.
Login Or Register To Read Full Story
Login Register