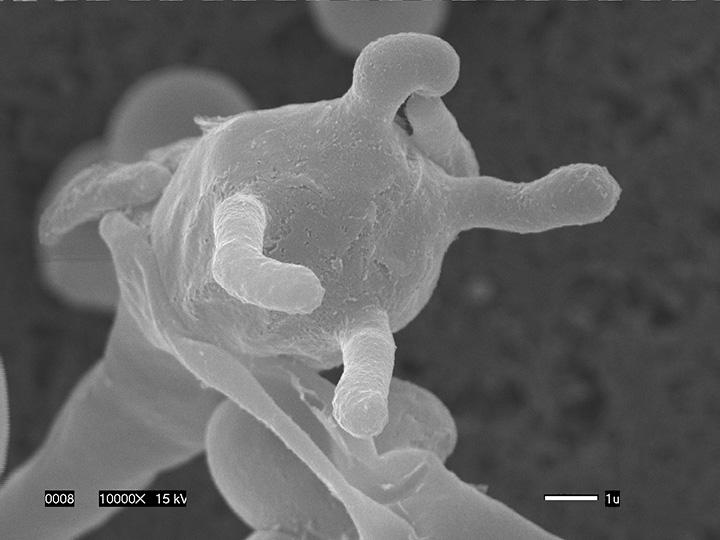 For more than a decade, a rare but potentially deadly fungus called Cryptococcus deuterogatti has taken up residence in the Pacific Northwest and Vancouver Island. Unlike its cousin Cryptococcus neoformans, which mostly infects patients with compromised immune systems, this fungus has sickened hundreds of otherwise healthy people. Now, researchers have found that the pathogen tossed aside over a dozen different genes on its way to becoming a new, more virulent species. Surprisingly, most of these discarded genes play a part in RNA interference or RNAi, a defense mechanism employed by fungi and other organisms to protect the integrity of their genomes. The study was published March 4 in PLOS Genetics. The article is titled “Gene Network Polymorphism Illuminates Loss and Retention of Novel RNAi Silencing Components in the Cryptococcus Pathogenic Species Complex.” "Genome instability is a bad thing in terms of human health, because it is linked to cancer and other diseases," said Blake Billmyre, lead study author and a graduate student in Dr. Joseph Heitman's lab at Duke University School of Medicine. "But it could be a good thing for single-celled organisms like Cryptococcus, because it enables them to mutate, evolve and adapt to survive under different conditions." Cryptococcus deuterogatti was largely confined to tropical climates until 1999, when it showed up on Vancouver Island and began spreading throughout southwest Canada and into Washington and Oregon. The emerging fungal pathogen causes severe pulmonary and central nervous system infections, and is fatal if left untreated.
Login Or Register To Read Full Story
Login Register