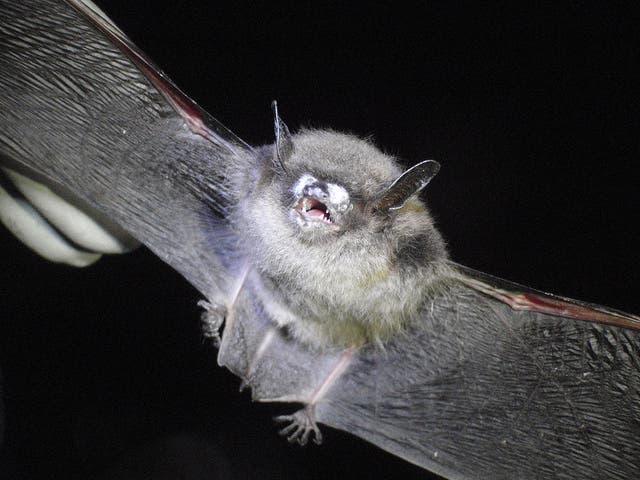 A deadly fungal infection afflicting snakes is eerily similar to the fungus that causes white-nose syndrome (WNS) in bats (see image), researchers report. Although Ophidiomyces ophiodiicola (the snake fungus) and Pseudogymnoascus destructans (the bat fungus) inhabit different ecological niches and thrive at different temperature and humidity ranges, the fungi share basic traits that allow them to persist across a range of habitats and infect multiple species, researchers report online on June 18, 2015 in the journal Fungal Ecology. The article is titled “The Natural History, Ecology, and Epidemiology of Ophidiomyces ophiodiicola and Its Potential Impact on Free-Ranging Snake Populations." "The fungus killing these snakes is remarkably similar in its basic biology to the fungus that has killed millions of bats," said Illinois Natural History Survey (INHS) mycologist Dr. Andrew Miller, an author on the study. "It occurs in the soil, seems to grow on a wide variety of substances, and it possesses many of the same enzymes that make the bat fungus so persistent." The INHS is a division of the Prairie Research Institute at the University of Illinois. The snake and bat pathogens both emerged in North America in the mid-2000s, and each is sweeping across the United States and into parts of Canada. Researchers and wildlife officials have struggled to keep up with the wave of infections and find ways to protect the animals. WNS afflicts bats that are hibernating in cool caves, depleting their energy stores and killing more than 90 percent of those infected. Snake fungal disease is active at higher temperatures. O. ophiodiicola consumes keratin, a key ingredient in snake scales. It can cause scabs, nodules, abnormal molting, ulcers, and other disfiguring changes to snake skin and other tissues.
Login Or Register To Read Full Story
Login Register