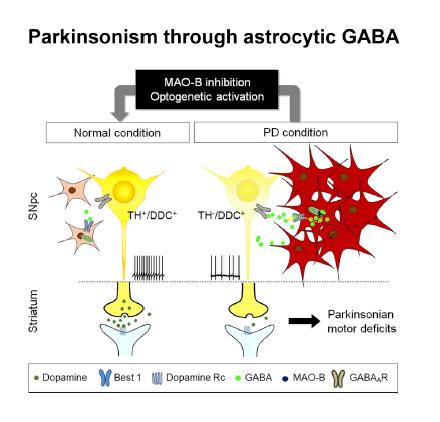 As many as 7 to 10 million people in the world are thought to live with Parkinson's disease (PD). Being the second most common neurodegenerative disease, PD severely affects patients' quality of life, not just brining movement abnormalities. Despite its prevalence and negative impact, current medical treatments for PD rely on alleviating PD symptoms with little effort to explore ways to reverse the symptoms. It has been firmly believed that abnormal movements of PD begin in the brain where the production of dopamine, a neurotransmitter for movement control, is irreversibly impaired, i.e., in a state of neuronal death. Currently, L-DOPA, a potent PD medication is mainly prescribed to replenish dopamine in the deprived brain. However, such a treatment is symptomatic therapy, rather than a disease-modifying therapy. Long-term use of L-DOPA is well-known to cause serious side effects such as involuntary, erratic, and writhing movements. Led by Dr. C. Justin Lee, along with Dr. Hoon Ryu and Dr. Sang Ryong Jeon, researchers at the Center for Cognition and Sociality within the Institute for Basic Science (IBS), the Korea Institute of Science and Technology (KIST), and the Asan Medical Center (AMC) have discovered a new mechanism for PD pathology. The researchers reported that the symptoms of PD begin when dopaminergic neurons are "non-functional", even before they die off. Though the neuronal death had been till now believed to be the obvious cause of PD, the study found that the movement abnormalities of PD begin in the earlier stage when dopaminergic neurons, though being alive, cannot synthesize dopamine (they are in a “dormant” state). "Everyone has been so trapped in the conventional idea of the neuronal death as the single cause of PD.
Login Or Register To Read Full Story
Login Register