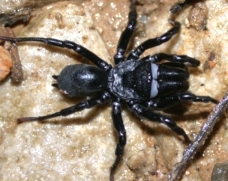 A team of researchers from the University of the Free State in South Africa (Drs. René Fourie and Charles Haddad) and the Royal Museum for Central Africa in Belgium (Dr. Rudy Jocqué) discovered very poorly known purse-web spiders of the genus Calommata in Africa. Four of the species described are new to science. The study was published in the open access journal ZooKeys. What is really unique about purse-web spiders is that, in contrast to trapdoor spiders, they do not construct a structure to close the burrow. Instead, they build a purse-shaped web of dense silk that covers a chamber in which the spider waits for wandering prey to step on the web, before impaling it from beneath with its exceptionally long fangs. Little is known on the biology of these small spiders as they are extremely difficult to locate in nature. The burrows of the African species have never been photographed, and the first ever photograph of a live African Calommata male, captured in a pitfall trap, was taken only last year by Ian Engelbrecht. “While Calommata spiders have been collected elsewhere in Africa throughout the last century, albeit on rare occasions, our study was prompted by the recent rediscovery of these spiders in South Africa, nearly eight decades since the last specimen was collected here in 1923. Currently six African species are recognized, with an additional six species from East Asia and Israel,“ Dr. Haddad said. The new discovery is expected to shed light on the evolutionary history of these spiders, known from two distant geographical regions, and to draw attention to the urgent need for their conservation. These spiders are mostly threatened by habitat loss and urbanization.
Login Or Register To Read Full Story
Login Register