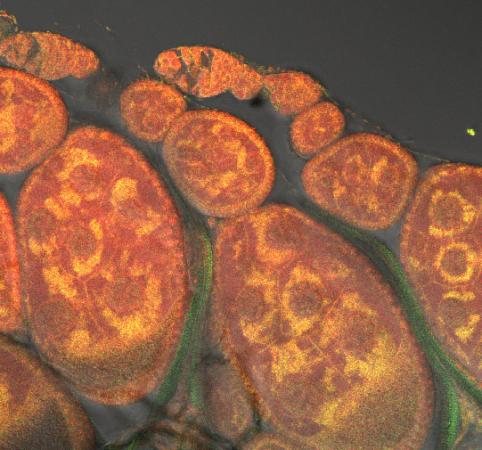 Plant and animal cells contain two genomes: one in the nucleus and one in the mitochondria. When mutations occur in each, they can become incompatible, leading to disease. To increase understanding of such illnesses, scientists at Brown University and Indiana University have recently traced one example in fruit flies down to the individual errant nucleotides and the mechanism by which the flies become sick. Diseases from a mutation in one genome are complicated enough, but some illnesses arise from errant interactions between two genomes: the DNA in the nucleus and the DNA in the mitochondria. Scientists want to know more about how such genomic disconnects cause disease. In a step in that direction, scientists at Brown University and Indiana University have traced one such incompatibility in fruit flies down to the level of individual nucleotide mutations and describe how the genetic double whammy makes the flies sick. “This has relevance to human disease but it’s also relevant to all organisms because these two genomes are in all animals and all plants,” said Dr. David Rand, professor of biology at Brown and senior author of the study published online on January 31, 2013 in PLOS Genetics. “There are a lot of metabolic diseases that are mitochondrial in origin and they have peculiar genetic tracking — a two-part system needs to be considered.” Five years ago at Brown, Dr. Rand and two postdoctoral researchers — Dr. Colin Meiklejohn, of Brown and Indiana University, and Dr. Kristi Montooth, now an assistant professor at Indiana University — began searching for an example in the convenient testbed of fruit flies.
Login Or Register To Read Full Story
Login Register