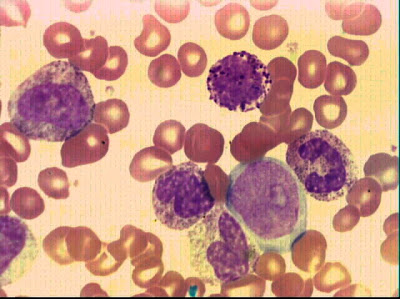 A compound produced from fish oil that appears to target leukemia stem cells could lead to a cure for the disease, according to Penn State researchers. The compound -- delta-12-protaglandin J3, or D12-PGJ3 -- targeted and killed the stem cells of chronic myelogenous leukemia (CML) in mice, said Dr. Sandeep Prabhu, associate professor of immunology and molecular toxicology in the Department of Veterinary and Medical Sciences. The compound is produced from EPA -- eicosapentaenoic Acid -- an omega-3 fatty acid found in fish and in fish oil, he said. "Research in the past on fatty acids has shown the health benefits of fatty acids on cardiovascular system and brain development, particularly in infants, but we have shown that some metabolites of omega-3 have the ability to selectively kill the leukemia-causing stem cells in mice," said Dr. Prabhu. "The important thing is that the mice were completely cured of leukemia with no relapse." The researchers, who released their findings in the December 22, 2011 issue of Blood, said the compound kills cancer-causing stem cells in the mice's spleen and bone marrow. Specifically, it activates a gene -- p53 -- in the leukemia stem cell that programs the cell's own death. "p53 is a tumor suppressor gene that regulates the response to DNA damage and maintains genomic stability," Dr. Prabhu said. Killing the stem cells in leukemia, a cancer of the white blood cells, is important because stem cells can divide and produce more cancer cells, as well as create more stem cells, Dr. Prabhu said. The current therapy for CML extends the patient's life by keeping the number of leukemia cells low, but the drugs fail to completely cure the disease because they do not target leukemia stem cells, said Dr.
Login Or Register To Read Full Story
Login Register