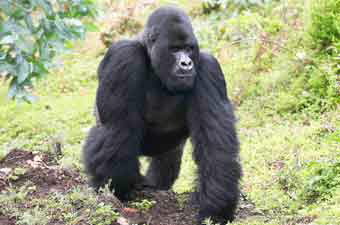 In a study published in the April 2011 issue of the journal Emerging Infectious Diseases, an international team of researchers report that a virus that causes respiratory disease in humans infected and contributed to the deaths of mountain gorillas in Virunga National Park in Africa. This finding raises questions about the safety of ecotourism for endangered species. The study was conducted by scientists at Columbia University's Center for Infection and Immunity (CII), Roche 454 Life Sciences, the UC Davis Wildlife Health Center, and the Mountain Gorilla Veterinary Project, a US-based non-profit organization. Mountain gorillas (Gorilla beringei beringei) live primarily in Rwanda, Uganda, and the Democratic Republic of Congo in Bwindi Impenetrable National Park and Virunga National Park, which houses about a third of the world's remaining gorilla population. Despite international efforts to protect this endangered species, there are currently fewer than 800 living mountain gorillas in the world. Now, this study, which focuses on an outbreak of respiratory disease in the Hirwa group of mountain gorillas in 2009, suggests that these animals may also be susceptible to human pathogens. Infectious diseases, especially respiratory ones, are the second leading cause of sudden deaths among mountain gorillas, after poaching. Growing ecotourism has increased interactions between humans and wild animals living in these parks, intensifying the chance for disease transmission. While ecotourism has heightened awareness of the need to safeguard endangered species, world travel also has the potential to quickly spread disease. Local authorities have recently tried to reduce animals' exposure to potentially harmful pathogens by limiting the number of tourists visiting wildlife parks and requiring visitors to wear protective masks.
Login Or Register To Read Full Story
Login Register