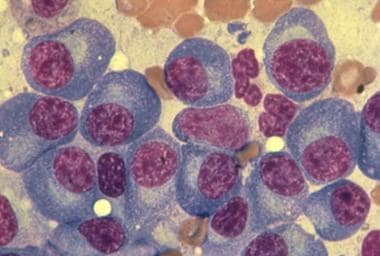 In a study published in the scientific journal Oncotarget, researchers from Uppsala University in Sweden show how the histone methyl transferase protein EZH2 affects the development of multiple myeloma, and that inhibition of EZH2 could be used as a new strategy to treat the disease. The article is titled “EZH2 Inhibition in Multiple Myeloma Downregulates Myeloma Associated Oncogenes and Upregulates MicroRNAs with Potential Tumor Suppressor Functions.” The tumor form multiple myeloma is today incurable and it has been challenging to improve therapy. Multiple myeloma is a type of blood cancer where immune cells grow in an uncontrolled manner in the bone marrow. Current therapies can prolong the survival of multiple myeloma patients, but the disease still remains incurable. In order to develop new treatment strategies increased knowledge is needed about the genetic alterations that cause multiple myeloma. Researchers at Uppsala University have previously shown that abnormal chemical modifications of DNA-associated proteins (histones) that regulate gene expression patterns can be a unifying underlying mechanism for the development of multiple myeloma. The researchers studied the protein EZH2, which is involved in chemical histone modification, and by treating tumor cells with substances that specifically inhibited EZH2 they could reduce survival of the tumor cells. In a recent study, the same research group, led by Professor Helena Jernberg Wiklund at Uppsala’s Department of Immunology, Genetics and Pathology, has identified a new mechanism that could explain the tumor-promoting role of EZH2 in multiple myeloma. The researchers analyzed the activity of a large number of genes in tumor cells that had been treated with an EZH2 inhibitor and they found four important oncogenes with a lower activity.
Login Or Register To Read Full Story
Login Register