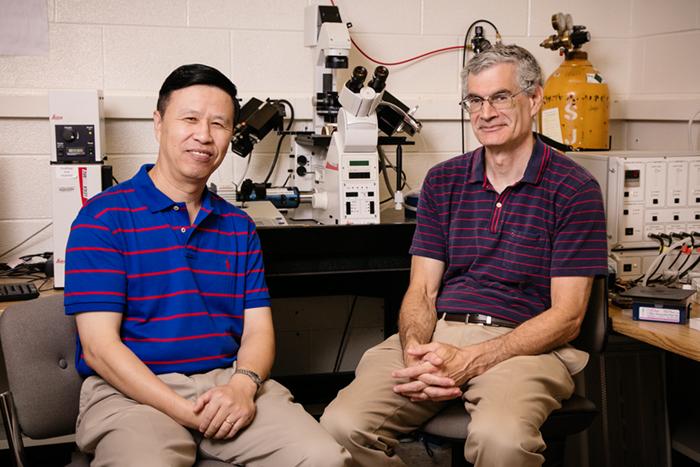 How genes in our DNA are expressed into traits within a cell is a complicated mystery with many players, the main suspects being chemical. However, a new study by University of Illinois researchers and collaborators in China has demonstrated that external mechanical force can directly regulate gene expression. The study also identified the pathway that conveys the force from the outside of the cell into the nucleus. Identifying the ways mechanical forces send signals within cells has applications not only in fundamental cell biology, but also for cancer, stem cells and regenerative medicine, said mechanical science and engineering professor Ning Wang, Ph.D., who led the study with cell and developmental biology professor Andrew Belmont, Ph.D. The work was published online on August 22, 2016 in Nature Materials. The article is titled “Transcription Upregulation via Force-Induced Direct Stretching of Chromatin." "Each cell in your body has the same DNA, but tissues behave very differently because genes are expressed differently," Dr. Wang said. "There is so much we don't know about gene expression. I think this work is the beginning to unravel some of the unknowns." Researchers have long known that forces, both external and internal, can affect cell behavior. But the question loomed as to whether the forces themselves triggered changes in gene expression, or if the forces triggered a chemical-signaling pathway within the cell. "Cells only have two 'senses' to interact with their environment," Dr. Wang said. "They cannot see or hear, but they can 'feel' mechanical forces and 'taste' chemical signals. Many studies have detailed chemical-signaling pathways, but it's important to understand how the mechanical forces affect the cell as well.
Login Or Register To Read Full Story
Login Register