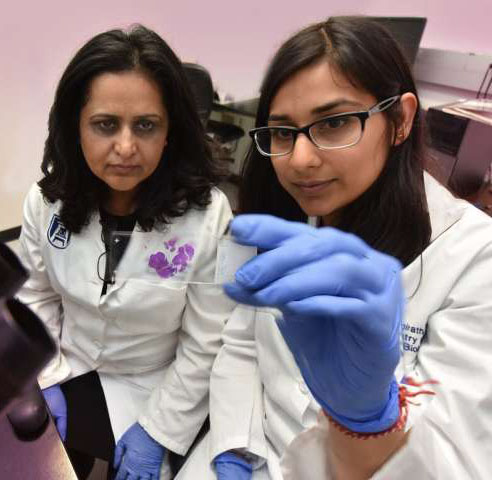 A transcription factor that aids neuron function also appears to enable a cell conversion in the prostate gland that can make an already recurrent cancer even more deadly, scientists say. The transcription factor BRN4 is mostly expressed in the central nervous system and inner ear, but now scientists have the first evidence it’s amplified and overexpressed in patients with the rare, but increasing, neuroendocrine prostate cancer, they report in an article published online on September 18, 2019 in the journal Clinical Cancer Research. The article is titled “BRN4 Is a Novel Driver of Neuroendocrine Differentiation in Castration-Resistant Prostate Cancer and Is Selectively Released in Extracellular Vesicles with BRN2.” As their name implies, neuroendocrine cells also are more common in the brain, but the walnut-sized prostate gland also has a small percentage of them and they appear to become more numerous and deadly in the face of newer, more powerful hormone therapy. The sex hormone androgen is a major driver of prostate cancer so hormone therapy to suppress it or its receptor — called chemical castration — is a standard frontline therapy, says Sharanjot Saini (left in photo), PhD, a cancer biologist in the Department of Biochemistry and Molecular Biology at the Medical College of Georgia (MCG) at Augusta University. Still, as high as 40 percent of patients develop castration-resistant prostate cancer within a few years. This more aggressive cancer is harder to treat, and patients may get a newer, more powerful hormone therapy like enzalutamide, which was first approved in 2012 for this recurring prostate cancer. It’s the far more common luminal cell type in the prostate gland that typically becomes cancerous, says Dr. Saini, the study’s corresponding author.
Login Or Register To Read Full Story
Login Register