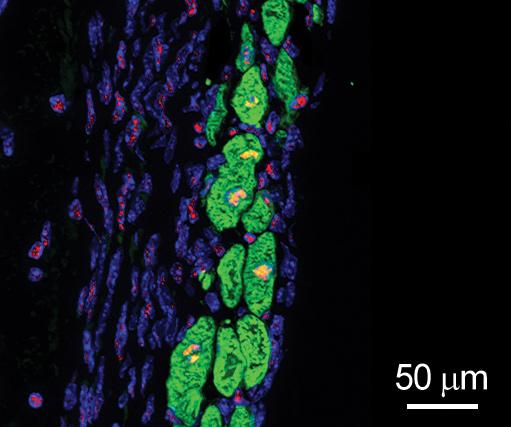 An international team of researchers has identified a protein that helps heart muscle cells regenerate after a heart attack. Researchers also showed that a patch loaded with the protein and placed inside the heart improved cardiac function and survival rates after a heart attack in mice and pigs. Animal hearts regained close to normal function within four to eight weeks after treatment with the protein patch. It might be possible to test the patch in human clinical trials as early as 2017. The team, led by Professor Pilar Ruiz-Lozano at Stanford University and including researchers from the University of California, San Diego (UC San Diego) and Sanford Burnham Prebys Medical Discovery Institute (SBP), published its findings online on September 16, 2015 in Nature. The article is titled “Epicardial FSTL1 Reconstitution Regenerates the Adult Mammalian Heart.” "We are really excited about the prospect of bringing this technology to the clinic," said Dr. Mark Mercola, Professor of Bioengineering at UC San Diego and Professor in the Development, Aging, and Regeneration Program at SBP. "It's commercially viable, clinically attractive, and you don't need immunosuppressive drugs." High-throughput technology in Dr. Mercola's lab was critical in identifying a natural human protein, called follistatin-like 1 (FSTL1), and showing that it can stimulate cultured heart muscle cells to divide. Researchers, led by Dr. Ruiz-Lozano, at Stanford embedded the protein in a patch and applied it to the surface of mouse and pig hearts that had undergone an experimental form of myocardial infarction or "heart attack." Remarkably, FSTL1 caused heart muscle cells already present within the heart to multiply and re-build the damaged heart and reduce scarring.
Login Or Register To Read Full Story
Login Register